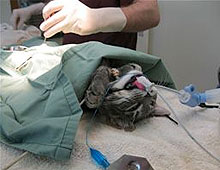 The female cat reaches adolescence shortly after 5 months of age, depending on the time of year that she was born. This may be later if she reaches puberty during the non-breeding season. The breeding season in cats peaks in spring and autumn but litters can be born at any time of the year. During this time the cat can be “in season” or “calling” for approximately one week in every two or three until she becomes pregnant. During calling the female cat tends to become very affectionate, she may display behavior such as loud and persistent crying and frequent rubbing and rolling on the floor. Such behaviour, and her scent, will attract pestering tomcats from miles around. Pregnancy usually lasts 65 days or 9 weeks. The female cat can cycle and become pregnant again as early as 2 weeks after kittening and while still feeding her litter.

Consideration should be given to whether time is available to care for the pregnant cat and her
subsequent litter. At times it can be very difficult to find homes for kittens and this necessitates having them destroyed. These are the main reasons for having your cat spayed, in addition spaying will remove the risk of uterine infection and will substantially reduce the future risk of mammary gland tumours.

An ovario-hysterectomy (spaying) is the operation to de-sex the female by removal of the ovaries and uterus. In the cat, it is generally done between five and six months of age, to avoid the first season. However it can be performed in older cats. If she already has a litter, she can be spayed as soon as the kittens can feed by themselves and survive on there own for a day (about four weeks old). Cats can be spayed during the first 3-4 weeks of pregnancy with no increase in risk to the cat.

Vaccinations must be up to date to avoid risk of infection to your own cat, or to others while your cat is in the clinic.

Although commonly performed and regarded as routine, ovario-hysterectomy is major abdominal surgery, which is performed under general anaesthetic, in a fully equipped veterinary surgery.

The hospital stay is usually for the day and recovery of the anesthetic is rapid.

Feed the cat a normal diet after surgery. She should be eating by the day after the surgery at the latest. Limit the cat to indoors for several days after the surgery. Refer to post op instructions supplied at time of discharge.

NOTIFY THE CLINIC IF THE FOLLOWING OCCURS:

Make arrangements to have your pets stitches removed in 10-14 days after surgery.