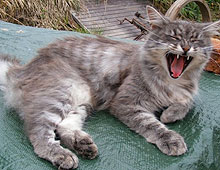 Male cats become sexually active at about 9 months of age but it can be younger, depending on how old they are during the breeding season.

Following puberty the male cat develops a number of often undesirable behavioral changes. He will become territorial and start to mark areas, often in the house, by spraying urine. This will by now have developed a particularly strong (and difficult to remove ) odour. He will start to enlarge his territory by straying even farther from the house, particularly at night. By increasing his territory he will come into contact with other cats and so fight for dominance. Inflicted fight wounds can result in severe infections and abscesses which may require veterinary treatment. FIV (Feline Aids) can be spread through bites, so it is not surprising that those cats most commonly affected are non-neutered tomcats. Tomcats are also quite likely to go missing for days or weeks during the breeding season and they usually return in poor condition, if they return at all.
Finally, but not least, neutering prevents the fathering of often unwanted litters.

Castration is the term applied to the procedure of removing the male sex glands, the testicles. When performed just before sexual maturity at 6-8 months it will help prevent the above, undesirable habits from ever being formed. Castration of sexually mature cats tends to stop them fighting, but established behaviour patterns of night prowling may still continue.

Remember that cats are night hunters by nature and while castration will stop the tendency to
compete for females, it will not usually diminish the cat’s tendency to hunt.

The longer a tomcat is left to spray and fight, the less likely neutering will stop it though neutering normally helps significantly in both regards.

Vaccinations must be up to date to avoid risk of infection to your own cat, or to others while your cat is in the clinic.

The operation is performed under general anaesthetic, and the testicles are removed through two small incisions in the scrotum. Recovery from anaesthesia is quite rapid, the hospital stay is short and healing prompt. There are no stitches to be removed.

Feed the cat a normal diet. He should be eating by the day after surgery at the latest.
Limit the cat to indoors for one or two days. Refer to post op instructions supplied at time of discharge.

NOTIFY THE CLINIC IF ANY OF THE FOLLOWING OCCURS:

There are no stitches to be removed after cat castration.