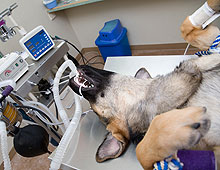 An ovario-hysterectomy or spay, is the operation to de-sex the female by complete removal of the ovaries and the uterus, thus rendering her unable to have heats or puppies. The operation is best performed at around six months of age to avoid all heats and the possibility of unwanted pups. This also has the added advantage of almost totally guaranteeing that hormone induced mammary cancer will not develop later in life. Spaying after two or more heats does not confer any protection against mammary cancer but is still beneficial as entire bitches can become more susceptible to life threatening infections of the uterus (pyometra) due to continued heats.

Vaccinations need to be up to date. Although commonly performed and regarded as routine, ovario-hysterectomy is major abdominal surgery, which is performed under general anaesthetic, in a fully equipped veterinary surgery. We do not spay whilst a bitch is in season as there are bleeding tendencies and unwarranted surgical risk. The hospital stay is usually for the day and is necessary for the bitch to be monitored closely during recovery.

You will be given detailed instructions pertaining to home care at the time of discharge from the hospital. In general, post-surgery the bitch must be kept sheltered and warm the first night and exercise should be restricted to short lead walks only for 10days days to avoid complications such as wound break down and inflammation. Although refusal to eat the night of the operation is common, bitches should be eating again by the next day and may be fed their usual diet. Notify the clinic immediately if you think there are any problems

Please make arrangements for a post-op check 2 days after surgery, and to have your pets stitches removed in 10-14 days after the surgery.